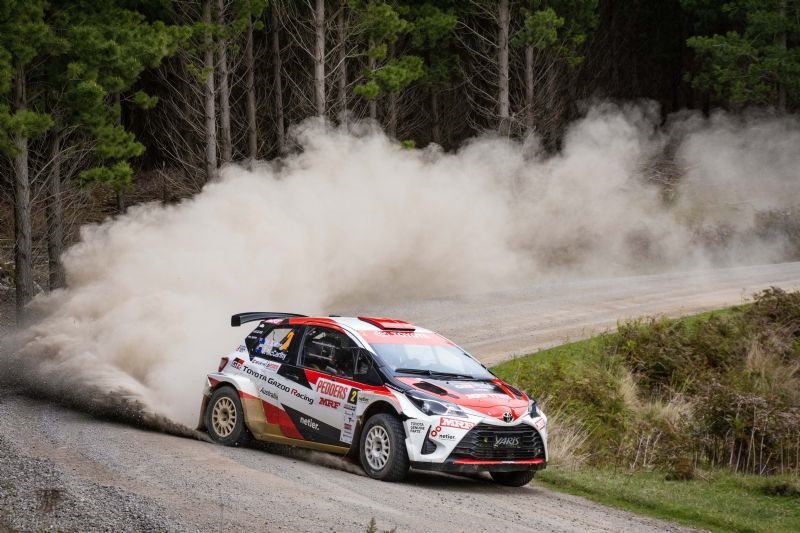 The TOYOTA GAZOO Racing Australia (TGRA) rally team's Harry Bates and co-driver John McCarthy have dominated the Eureka Rush rally held near Ballarat over the weekend, winning every stage bar one in the fourth round of the 2019 Australian Rally Championship (ARC) to give them overall top spot on the podium.

Putting in a no less impressive performance in the second Yaris AP4 was younger brother Lewis Bates and co-driver Anthony McLaughlin who took one stage win, two seconds and seven third fastest times to finish in third place overall.

The Eureka Rush rally also featured as a round of the 2019 Asia-Pacific Rally Championship with the TGRA team taking first and second places in that series.

The win for Harry and John was their third consecutive victory in the annual Victorian rally ensuring they remain at the top of their respective leaderboards in the 2019 ARC season, having won all four rounds this year in WA, ACT, Tasmania and now Victoria.

The lead TGRA Yaris finished a clear 1:33.5 seconds ahead of the second placed Subaru of Simon Evans and Bernie Webb, giving Harry and John 61 points for the round to take their leading totals to 284 points for the season.

With their third place finish this weekend, Lewis Bates and Anthony McLoughlin gained a valuable 46 points helping them to move into second place on their respective driver's and co-driver's championship tables sitting on 178 points.

Toyota has now also extended its lead in the manufacturer's championship race with just two rounds remaining in the Adelaide Hills on September 20-22 and the final Rally Australia on November 15-17 in NSW.

Speaking after the rally, Harry Bates said it was a tough win and the sprint format and four forest stages and the tarmac super special stage on the Saturday night were very challenging.

"We had to be on it from stage one and I think we achieved that with the most stage wins," Harry said.

"We are very happy to be here and completely stoked with the way the day has gone and I don't think John and I put a foot wrong today," Harry said.

Internationally, the TOYOTA GAZOO Racing (TGR) WRC Rally Team has also had a superb weekend dominating Rallye Deutschland with a triple podium victory in the 10th round of the World Rally Championship.

Championship-leading driver Ott Tänak and co-driver Martin Järveoja drove their WRC Yaris hard and fast to take their fifth win for the season with Kris Meeke and Seb Marshall in second place and Jari-Matti Latvala and co-driver Miikka Antilla making it an all-Toyota podium.

The sensational victory has brought Toyota to within just eight points of the lead in the WRC manufacturer's championship while Tänak leads driver's championship by 33 points, with just four rounds remaining in the 2019 season.

The WRC next heads east for Rally Turkey from September 12-15.